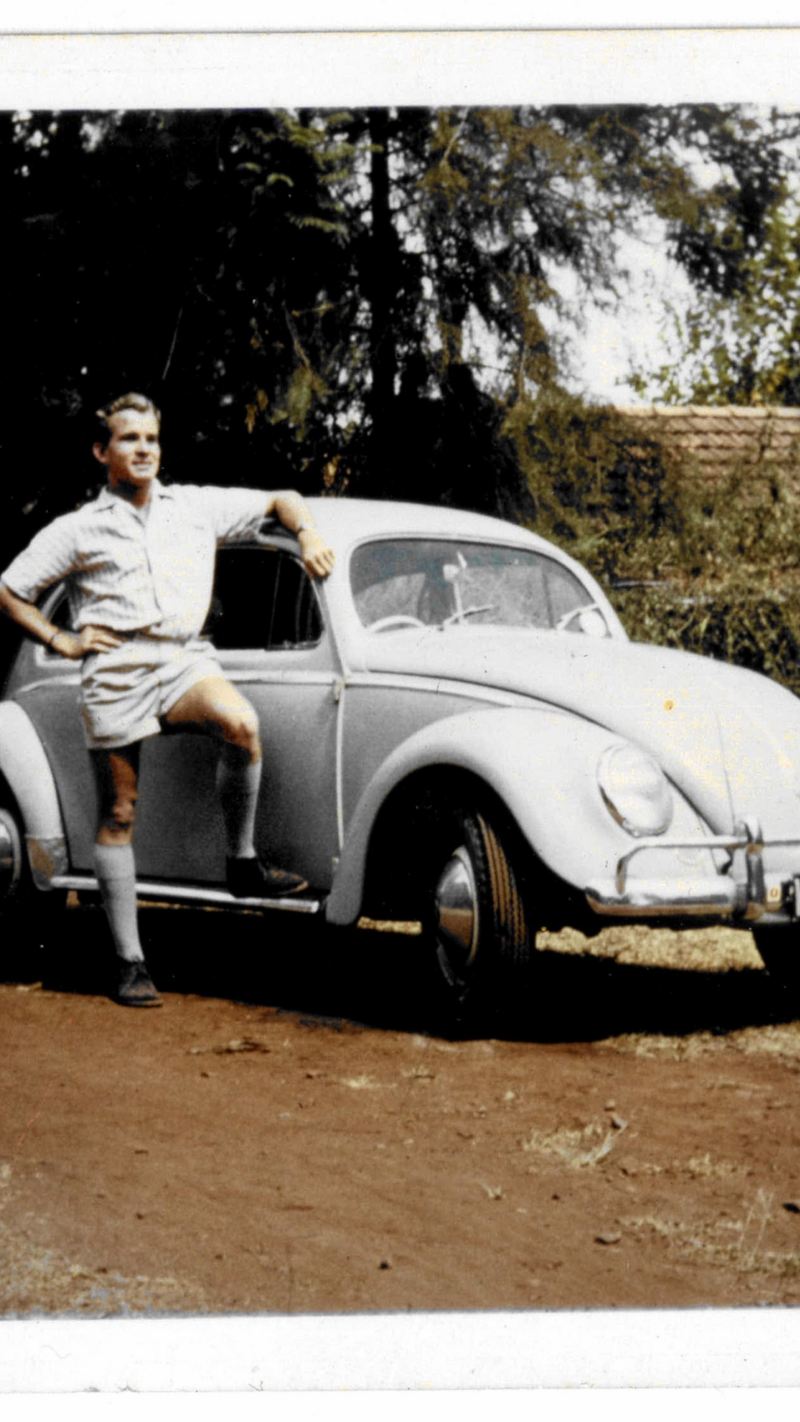 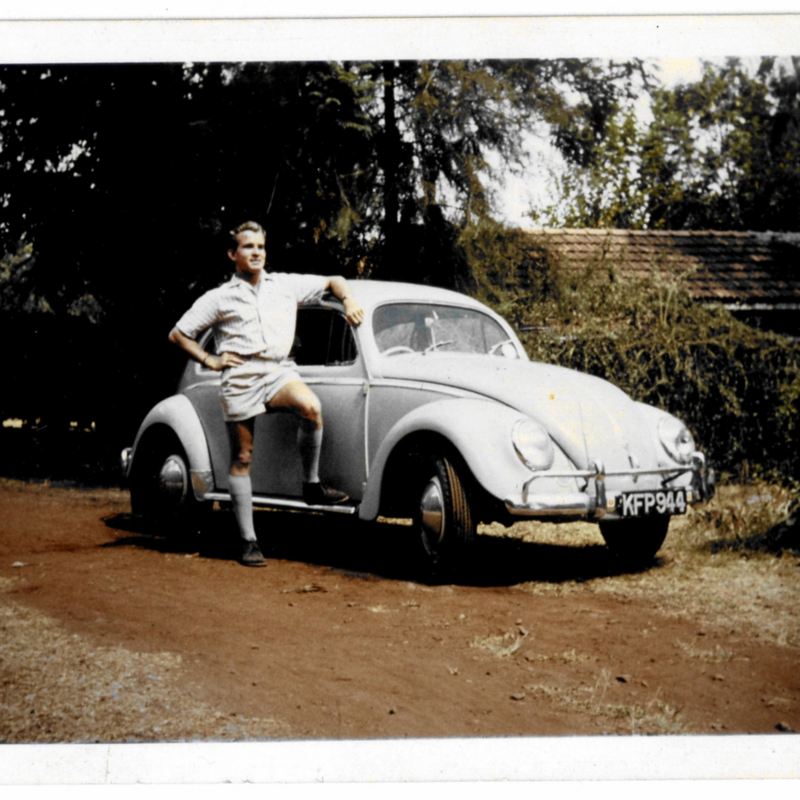 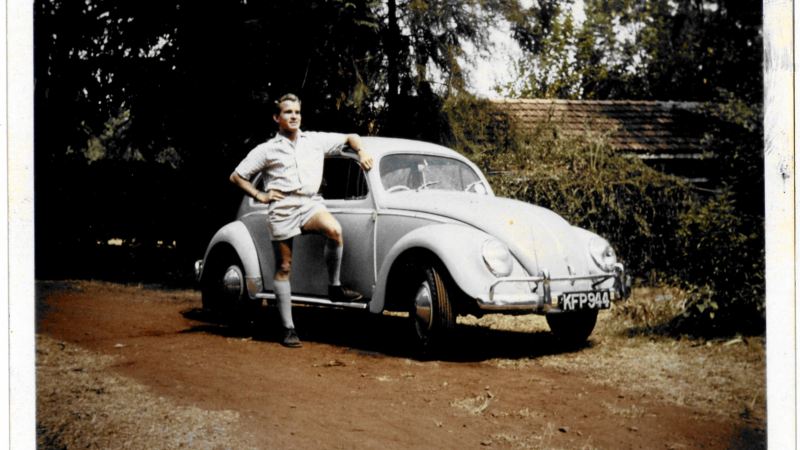 There’s no denying there is a considerable amount of thought required when purchasing a car… adaptability, performance, technology, sustainability – the list is endless. One thing that distinguishes a customer’s decision to purchase a Volkswagen though, is the ability to explore.

It was this unique appeal that inspired young railway worker, Jean Boullé, to join the Volkswagen family and begin an adventure of his own.

As a young man in East Africa, Jean and three friends spontaneously decided to take a road trip around the continent’s highest mountain, Mount Kilimanjaro.  Their vehicle of choice: a brand-new 1957 pale-blue Beetle, purchased for just £599. Fitted with chrome bars on the front and back of the vehicle, a twin exhaust and more than enough space for four friends, Jean recalled the popularity of the Beetle in Nairobi, Kenya, describing it as the “vehicle of the young generation”.

“Most young people bought a Beetle as it reflected excellence and class. But once you drove one, you knew that that the car was so much more than that, it was economic and reliable,” Jean said.

With no particular reason to visit Mount Kilimanjaro, the thought of an adventure was all Jean and his friends needed to embark on their trip. Loading the Beetle with all the necessities: food, water, sleeping bags and, of course, their hockey sticks the four friends began the two-day journey.

The drive to Mount Kilimanjaro is considered to be relatively simple, as one road surrounds the mountain and connects back to Nairobi, where Jean and his friends started their trip. Driving on mostly corrugated dirt roads, Jean had complete trust that his Beetle would be able to complete the trip without any complications. This trust was verified as Jean was left astounded by the vehicle’s composure and its ability to gracefully carry four men and a boot-full of camping and hockey equipment around Mount Kilimanjaro.

“Most of the roads we drove on to Mount Kilimanjaro were dirt, but the torsion bar on the VW made the drive feel so smooth and easy,” Jean remarked on the Beetle’s suspension.

While the complete route from Nairobi to Mount Kilimanjaro can be driven in approximately three hours, Jean and his friends had no desire to rush their trip. Although they weren’t literally stopping to smell the roses (a rare sight in Africa), the four friends definitely took their time, stopping for impromptu hockey games on the side of the road, instead. The drive had no shortage of commentary as not all passengers were on the same team back in Nairobi; Jean recalled the enjoyment he felt participating in some healthy competition throughout their trip, with the score of their games serving as the main topic of discussion in between pit stops.

Even though the final score always seemed to skew in favour of the opposing team; one thing the four friends could agree on was the endurance and strength of the Beetle. Jean didn’t experience a single issue with the vehicle throughout and well after the trip to Mount Kilimanjaro.

“It was not until the Beetle reached 43,000 miles that I faced an issue with the car, at this point, I found a problem with the engine and so I had the differential gearbox taken out and repaired,” he recalled.

Reaching the lower slope of Mount Kilimanjaro towards the late afternoon on their first day, Jean and his friends unpacked the Beetle and set up camp, ready for an evening under the stars. Using the Beetle as both a tent peg and a bed for one; it was clear that this Beetle was seen as more than just a car in Jean’s eyes.

Jean has remained a fan of Volkswagen over the years and a proud lover of the Beetle. A few years after his journey to Mount Kilimanjaro, Jean sold his pale-blue Beetle and moved to England to begin a new adventure – starting a family. Staying loyal to the brand, he repurchased a Beetle which became his family’s car.

It is stories like Jean’s that encapsulate the essence of VW and inspires us to continue creating cars so that people like Jean can create unforgettable memories.